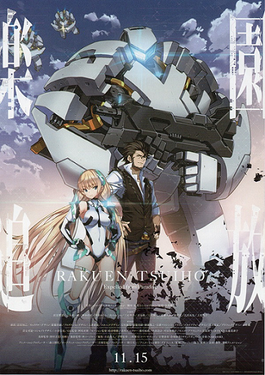 DEVA is virtual space station where its residents do not have actual bodies, but instead their bodies are their minds that have taken form. Angela Balzac is an agent for DEVA. Her job is to dispose of any nuisances that attempt to disturb the peace of DEVA. When she fails her mission to eliminate a threat to DEVA, she is assigned the mission to track the target on Earth, the desolate planet inhabited by the rest of the human race. Her newly assigned partner, Dingo, cuts off Angela's connection to DEVA to not give off their location to their target. Without the help of DEVA technology, Angela and Dingo must track down and eliminate the target.

Rakuen Tsuihou: Expelled from Paradise is an action, sci-fi, and fantasy animation. It deals a lot with problems in society, as that is what the writer, Gen Urobuchi, is known for in other films. It has a very in depth plot, and sometimes missing a minute or two of the movie can lead you to be very confused for a long duration of the film. Paying attention to the movie is what makes the film enjoyable. This isn't a movie where you can doze off at the boring parts and be attentive during the action-filled parts and still enjoy it. Plot is everything in this movie, but the action included may cause you to think otherwise. If you're into movies that deal with society and its issues, sci-fi, deep plot, and some action, then this movie is worth watching.